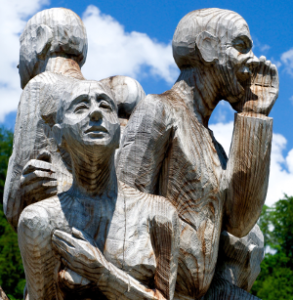 “Culture Warrior” is usually associated with conservative movements, but the moniker applies to both right and left leaning people who set out to challenge and ultimately change society. These are broad-picture type, seeking mass moral change to their way of thinking. They seek to inform through mass media, influence through social media, and legislate morality (yes – both sides) through political activism.

Culture Warriors wake up every day to go to battle – taking on society and those who stand in the way. As with any good “big-picture” general, they often have to allow for a certain level of collatoral damage as they change things. Bakers who lose their businesses or children who lose their lives are all seen as tragic, but unavoidable, casualties on the battlefield over Homosexual rights or Second Amendment protection. Changing culture often requires breaking a few eggs – no matter how innocent.

Yet Jesus and his followers never addressed culture. Not once! Our Lord was solely focused on how each individual was broken, how each individual was steeped in unbreakable sin, and how each individual was saved from that death by the grace of God through His Son. Jesus did not care about Rome, Greece, Egypt, or Israel. But he did care about a simple and often self-contradicting fisherman he named to be the Rock of the Church. He cared enough about a young fanatic turned follower who would pen the great epistles of Scripture. And he cared enough about a young prostitute who was overwhelmed by both her own sins and the grace that removed those sins that He promised that she would be lifted up for all time. Even when culture came crashing down upon Him forcing him to walk that terrible road to Calvary, Jesus never wasted a moment on condemning the judiciary processes of the day. However, nn His agony He did take time to look down on those wielding the hammer and nails to plead with His Father to forgive them.

Jesus was not a culture warrior simply because He did not have to be. All dominions are already at His feet. All cultures, all governments and those who run them are called into being and dismissed at His word – and by no one else. Jesus is the ultimate “big-picture” guy – and He does not have to fight battles in which He has already won the war.

Imagine what would happen if we as Christians spent less time engaging culture and more time engaging the individuals around us with the love, passion, and joy of Jesus Christ? Imagine what would happen if we stopped building mega-churches and started building disciples – one by one. What if we stopped designating our churches as “gay-safe”, “contemporary”, or “traditional” and start instead by lifting high the Cross that shames us all as sinners and brings forth the grace that reunites us to God. Imagine the results if we stopped focusing on the faults of others and instead realized and testified to the immense price Jesus paid to secure our own grace from Sin.

In short, what would happen if we as Christians would spend less time battling the culture and more time proclaiming the victory of Jesus Christ?

We are supported by our listeners.